Help us
take over
the world

Here’s how we helped theatre and mime group Jakop Ahlbom Company develop its on- and offline presence and grow its audience. Help us
take over
the world

Here’s how we helped theatre and mime group Jakop Ahlbom Company develop its on- and offline presence and grow its audience.

Jakop was struggling with how to present his theatre group to the world. Music, dance and illusionism define the usually large and elaborate productions. Ideally fit for a bigger, international audience.

Their success in the Netherlands was picked up internationally but it missed a constructive plan and vision to consistently follow through on. They would sell out the Sydney Opera House one week, but then perform the same show for meagre audiences out in Dutch provincial towns the next.

We asked Jakop how our collaboration could be ultimately successful. In his mind this would be when theatres would appreciate the production artwork so much that they would adopt it for their own promotion. This kind of free publicity is immensely valuable in their industry. Realizing they needed to appeal to a larger audience, we started with strategy sessions. We quickly concluded that the company needed to radiate more unity in their media expressions.

We decided the group needed to be approached and recognized as a brand. To accomplish this we started at the beginning: A new visual identity. The individual actors are rigorously choreographed until their bodies and movements mould into powerful rhythms and flowing patterns. The logo symbolizes these choreographies. It shows a strong graphical rhythm built up of individual characters. We then combined the logo with a grid of red dots in a similar pattern, telling the company’s story of music, rhythm and dance. The typography illustrates the illusionistic nature of many of the performances. Hiding and revealing. Observing things from different perspectives. Physical as well as conceptual.

Some of the greatest hit shows are still being performed in The Netherlands and abroad.

The corresponding posters for those shows were modified to fit the new look, so that the sum of its parts still conforms to a uniform identity. The website is the most important marketing tool. Where direct, emotional engagement happens in the theatre, JAC’s online presence deals with the practical side of business.

We re-evaluated the site to define some key features i.e. agenda, ticket sales, show info and promotion. Next we produced the functional and visual designs. We’re currently involved in repurposing their material to banner campaigns. During seasonal down time we create teasers and trailers to keep a steady stream of social content.

Most often, advertising for a show needs to be communicated to magazines and theatres ahead of the theatre season for programming. While there is only an inkling of what Jakop wants to bring to the stage, we need to visualize what it should communicate. This means creating images based on nothing more than a rudimentary idea.

The first show we visualized for JAC from concept and art direction to production was called Le Bal: a nostalgic journey through a century of music and dance. Starting from the twenties on the left, down to the nineties on the right.

This image ended up on the cover of a couple of theatre yearly program brochures, something Jakop considered one of the highest achievable goals. The next briefing was no different than the previous: Only a title was known, SYZYGY, the cosmic phenomenon where sun, earth and moon are in perfect alignment.

Subject was a given – both simple yet intricately complex: the human body. How do media and culture influence our self-image, and are we capable of accepting change?

With so many physical possibilities within reach, where do we draw a line? What even is beauty? We tackled these questions by lining up three ‘heavenly’ bodies and creating a fourth. “We rebranded our complete company corporate style. The productions we make are top notch and now our communication channels match that standard. Our visitor numbers have gone up since we started working with MiNSK. Great designs, good quality, wonderful service, and nice people to work with.” 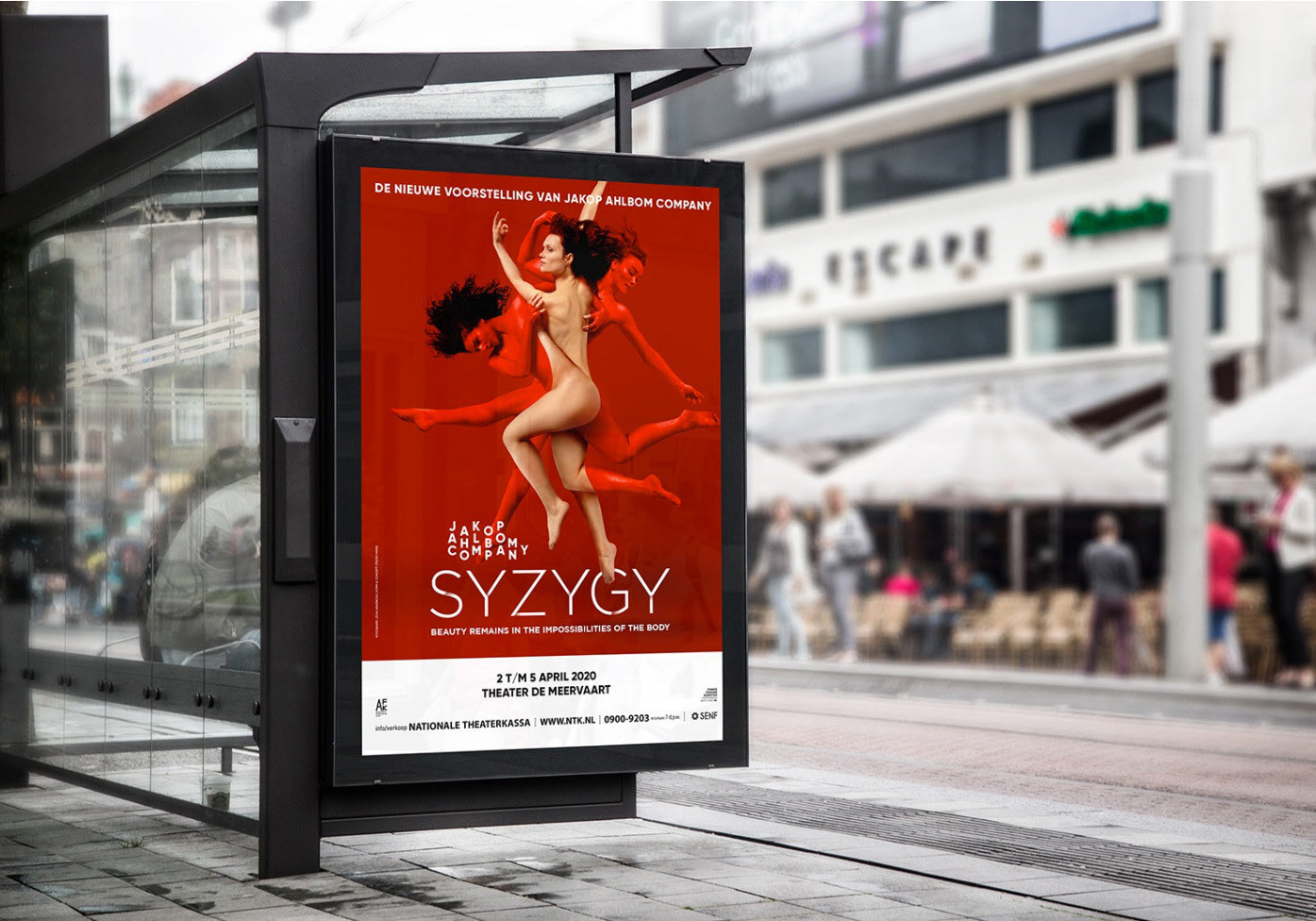