Here’s how we helped Jakop Ahlbom realize artwork for his theatre shows. 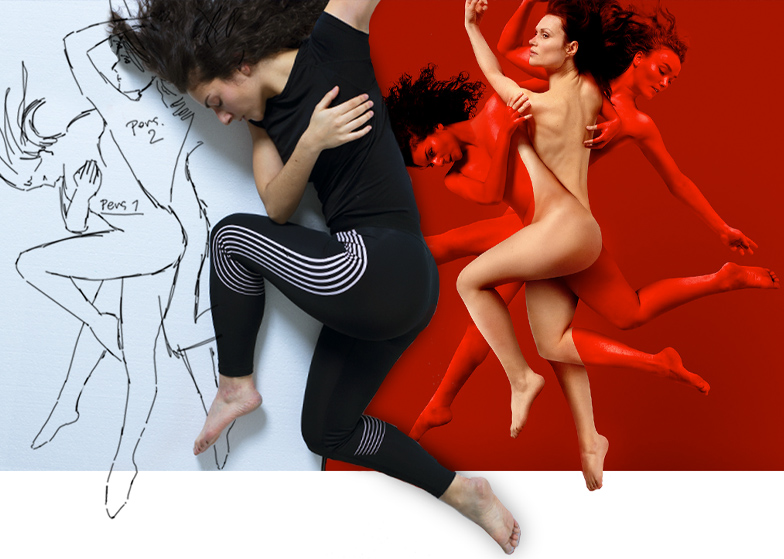 Here’s how we helped Jakop Ahlbom realize artwork for his theatre shows.

Most often, advertising for a show needs to be communicated to magazines and theaters ahead of the theater season for programming. When there is still only an inkling of what Jakop wants to bring to the stage, we need to already visualize what it should communicate. This means creating images based on nothing more than a rudimentary idea.

The first project we realized for Jakop was the campaign image and trailer of ‘Innenschau (revisited)’. In this surreal thriller, the lives of a nurse, a stalker and a fired bank employee become inextricably linked. As a viewer you are pulled into their pitch-black world of chasing fantasies, mysterious scenes and Kafkaesque situations.

Since the trailer was a remake of Jakop’s original performance, we already knew what the most characteristic scenes would be. As is often the case with trailers, we needed to show as much as possible to create interest without giving away too much.

Happy with our collaboration on Innenschau, Jakop asked us for his next production called ‘Le Bal’: from concept and art direction to production. The rudimentary idea in the case of ‘Le Bal’ was a nostalgic journey through a century of music and dance. Except for the cast, all else was unknown. And so we made use of that cast to capture one century of iconic dance and music into one panoramic image: starting on the left in the 1920’s and moving towards the present.

This image ended up on the cover of a couple of annual theater program brochures. Something Jakop considered one of the highest achievable goals, since it meant massive exposure at literally no extra expense.

For this shoot we worked together with photographer Leon Hendrickx, costume designer Esmée Thomassen and hair & makeup artist Nienke Algra.

Due to the panoramic design, we were able to use it in traditional media as a triptych, but also as separate posters. The next briefing was no different: Only a title was known, SYZYGY: the cosmic phenomenon where sun, earth and moon are in perfect alignment.

Subject was a given – both simple yet intricately complex: the human body. How do media and culture influence our self-image, and are we capable of accepting change?

We tackled Jakop’s input by asking ourselves questions: What is beauty? When do we find alignment? How can something be simple yet complex? We answered these questions by lining up three ‘heavenly’ bodies and creating a fourth.

Using the photography as a source, we animated the bodies slightly as if it was shot footage. The music by Leonard Lucieer ties everything together. A magician makes a woman disappear. She doesn’t return. Her husband does everything to find her lover and enters the magical world of the magician. He ends up in a surreal maze where illusion and reality intertwine. Whenever he seems to find her, she escapes him. The man gets lost deeper and deeper in the magician’s mind.

The husband enters a maze with multiple levels or layers: Peel away one, and a new one appears. The players on stage burst out of each other like a human Matryoshka doll; which eventually asks the question of whether the woman even wants to be saved by her husband. 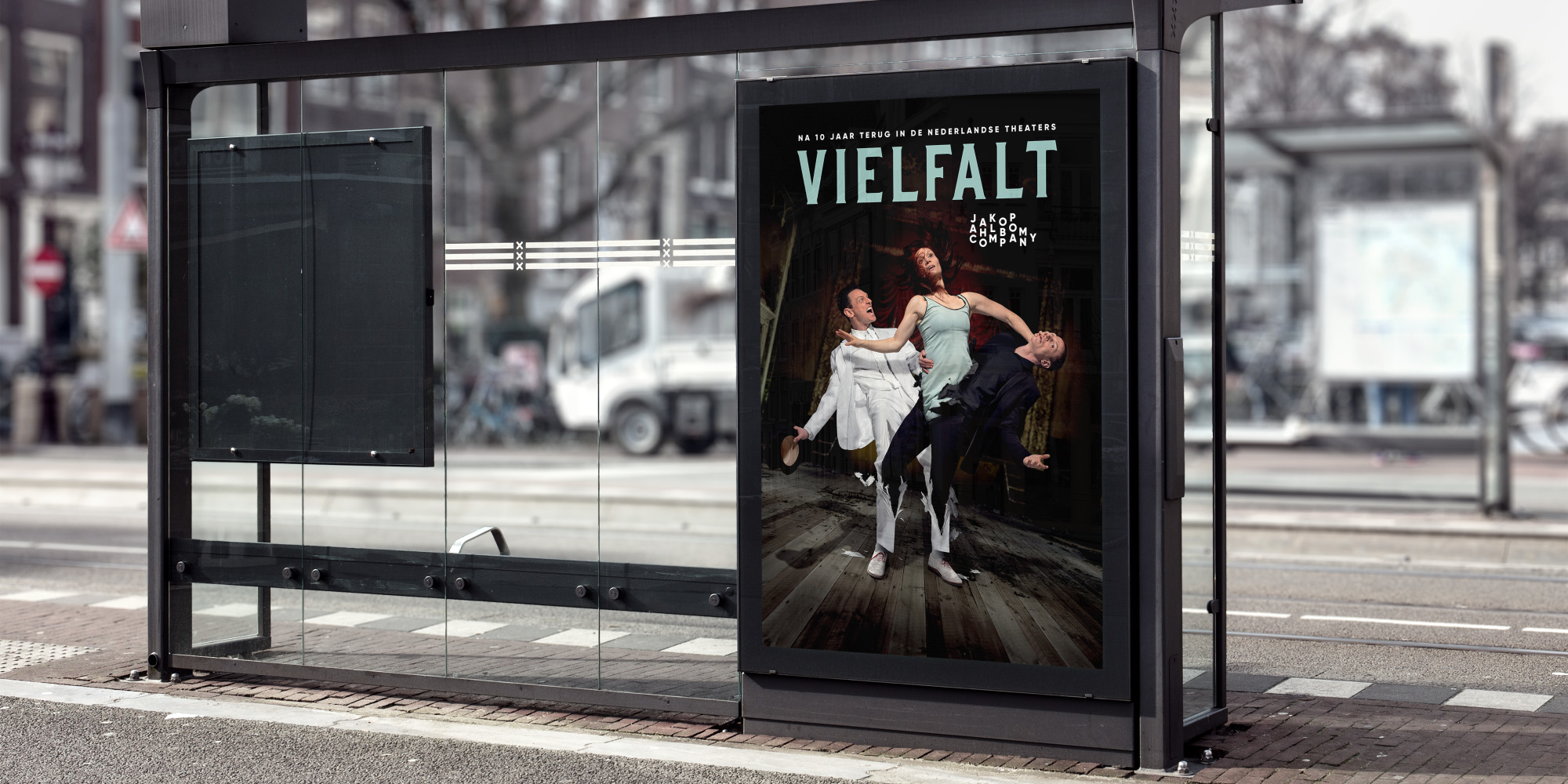 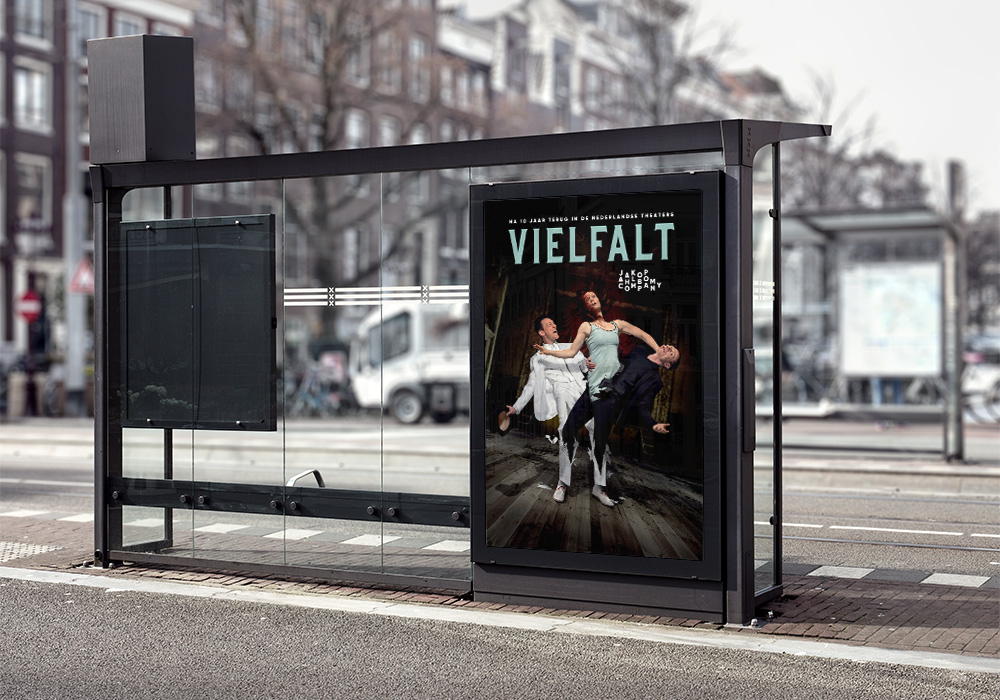